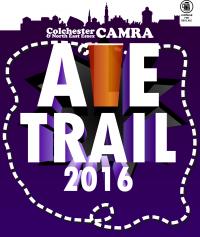 The format is the same as previous years - visit a participating pub, buy a pint of real ale or real cider and collect a sticker on your collector's card.

There's two groups of pubs - North and South - complete a group by visiting at least 8 of the 10 pubs.

Bring your completed card to the 31st Colchester Real Ale and Cider Festival to claim your prizes.

Completing one group will win you tokens for 3 free half pints of real ale or cider at the festival and entry into a prize draw.

Complete both groups and claim a £10 beer card to spend at the festival, the exclusive Ale Trail 2016 pin badge and entry into a prize draw.

Stickers can be collected from 17th April, last date for claiming prizes is the last day of the 31st Colchester Real Ale and Cider Festival, 4th June 2016.